Référence : « You are Called Venus » | Various perspectives on the show in March 2016 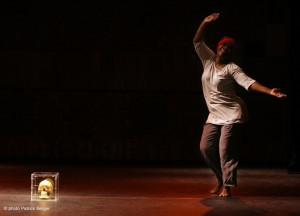 Chantal Loïal, a choreographer-interpreter, the leader of her company Difé Kako and the creator of a number of shows, mixes together people’s diversity and genre’s diversity and carries us to the cultures of a triangle linking the Caribbean, Africa and Europe.

This activist-artist, working on history and History, ceaselessly questioning her approach to her favorite themes, has been focusing on the same goal : deciphering what ‘being Creole’ means in the twenty-first century, and alerting the public to universal values, a concept that she is keen on sharing through various artistic works that are both innovative and unifying.

She will be on tour next March and April with her play ‘You Are Called Venus’ staged through different approaches and perspectives, from the angle of History, Science, French speaking communities, and the Female genre.

« In this solo show, full of voluptuousness and authenticity, Chantal Loiïal, a choreographer from Guadeloupe, draws her inspiration from the history of the Hottentot Venus in order to question the Western World’s perception of the concept of difference »

The show will have the honor of opening the month of ‘Francophonie 2016’ at the French Embassy, in association with the Alliance Française, like in 2015 at The John F. Kennedy Center for the Performing Arts

Around the International Day for Women on March,8 and as part of the special theme ‘Women from Overseas’, the play will be broadcast on TV in the program Multiscénik, prepared and hosted by Greg Germain and Axe Sud Production.

Within the framework of exhibitions at the Memorial ACTe in Pointe a Pitre, Guadeloupe, in the presence of Pascal Blanchard from ACHAC, a historian specializing in the ‘Colonial Fact’, the choreographer’s work will be presented to several types of public, among whom school children.

In the course of an evening session organized by Alain Dedieu for le Café des Sciences in Avignon, in the presence of the famous geneticist André Langaney who will deliver a lecture entitled ‘Becoming Human and Remaining so’, ‘On t’appelle Venus’ will be shown to the public. It will be followed with a debate hosted by the scientist and the choreographer. Marc Verhaverbeke, the author of the texts of the play, will be present too.

In order to get more information on Chantal Loïal and her company, you can visit the site of this company.

We use cookies on our website to give you the most relevant experience by remembering your preferences and repeat visits. By clicking “Accept All”, you consent to the use of ALL the cookies. However, you may visit "Cookie Settings" to provide a controlled consent.
Cookie SettingsAccept All
Manage consent

This website uses cookies to improve your experience while you navigate through the website. Out of these, the cookies that are categorized as necessary are stored on your browser as they are essential for the working of basic functionalities of the website. We also use third-party cookies that help us analyze and understand how you use this website. These cookies will be stored in your browser only with your consent. You also have the option to opt-out of these cookies. But opting out of some of these cookies may affect your browsing experience.
Necessary Toujours activé
Necessary cookies are absolutely essential for the website to function properly. These cookies ensure basic functionalities and security features of the website, anonymously.
Functional
Functional cookies help to perform certain functionalities like sharing the content of the website on social media platforms, collect feedbacks, and other third-party features.
Performance
Performance cookies are used to understand and analyze the key performance indexes of the website which helps in delivering a better user experience for the visitors.
Analytics
Analytical cookies are used to understand how visitors interact with the website. These cookies help provide information on metrics the number of visitors, bounce rate, traffic source, etc.
Advertisement
Advertisement cookies are used to provide visitors with relevant ads and marketing campaigns. These cookies track visitors across websites and collect information to provide customized ads.
Others
Other uncategorized cookies are those that are being analyzed and have not been classified into a category as yet.
Enregistrer & appliquer